Adapt and overcome: What the story of the Tardigrade can teach us about resilience

Adapt and overcome: What the story of the Tardigrade can teach us about resilience

When you think about the most resilient creatures in the animal kingdom, what comes to mind?

Perhaps the camel, which can survive for 6 months with no food or water. Or maybe it’s the honey badger, which tends to drink snake venom like cranberry juice.

Or how about the immortal jellyfish? This is one of the most fascinating (and oldest) creatures on Planet Earth. Not only are they immortal, but they also live their lives in Benjamin Button-esque fashion. Turritopsis nutricula jellyfish live to the age of 50 and think, “Well that was fun, but what if I did all of that again in reverse?” When they get back to the beginning, they age forwards again…kind of like the David Fincher film playing on an endless loop, which, I must be honest, felt rather reminiscent of my watching experience.

Those are all fine contenders. But I think the award for the most resilient animal goes to the Tardigrade.

A Tardigrade is a water creature – it needs water to survive. But if there’s a shortage – say, they made their home in a lovely bunch of moss which has unfortunately dried out, they have a plan B.

A Tardigrade will curl up, slow down their metabolism by a factor of 10,000, and can go without a drop of water for decades. Then, when conditions are better, they reboot, rehydrate, and carry on as if nothing has happened. Take that, evolution.

That’s not all. They can also survive temperatures of up to 150 degrees centigrade, without so much as a flinch. How about colder temperatures? Snow problem. (Sorry.) Turn the temperature down to minus 272 centigrade (pretty much Sub Zero), and you’ll defeat the atom, but you won’t make a mark on the Tardigrade.

This one is my favorite: They can survive space travel. In 2008 European scientists sent a colony of 3,000 tardigrades into low grade orbit for 10 days. The majority were able to withstand both cosmic radiation, and the power of the Sun’s UV light.

I guess one question you might ask is, “Why?” Why does a tardigrade need such a robust defense strategy when it’s only a millimetre in size and looks like a cuddly bear under a microscope?

It comes down to adaptation. Tardigrades are water creatures who needed to adapt to occasional droughts. Sure, they may have overshot it a little by including the potential for space travel too. But, they addressed their main threat, and set a more positive course for the future. I think that’s a nice sum up of what being resilient means.

Which brings me to my main reason for this post. I’d like to talk about security resilience, and how it can be the baseline for plotting a stronger future for your organization.

I believe, as with most things, that security resilience starts with people – looking after them, giving them what they need to flourish, and in most cases, getting out of their way.

That all sounds basic. However, the scale of what our people and security teams need to protect within the enterprise and the internet as a whole, keeps getting bigger. Not everything’s in the data center, and not everything’s in the cloud. Addressing the core challenges, and adapting as needed, is central to a security resilience strategy.

This involves moving away from a siloed security policy that is only focused on threat prevention and treats all alerts and threats equally. Not only is this way inefficient – it wears defenders out. We can’t prevent everything, so we must prevent what will affect us most from a security standpoint, while increasing detection and response for anything else that may come our way.

That’s where a detection, response and recovery strategy comes into play. This strategy is underpinned by risk-based contextual analysis (i.e., “Exactly how concerned do we need to be with this new vulnerability?”) and continuous trust assessments.

For your people running daily analysis, this is crucial to help them move from the overwhelming environments that often stem from alert fatigue. Dealing with the latest headline threats is reactive, exhaustive, and is a large component as to why burnout is so prevalent in security. Context-centric security is a key factor to moving away from this. 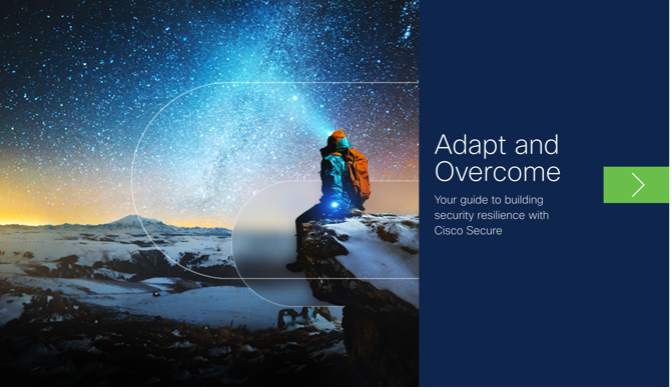 We explore this concept and more, in our new e-book: Adapt and Overcome: Your guide to building security resilience with Cisco Secure.

In this e-book, we identify the key steps to implementing security resilience. We help you to find the priorities, so you can drive resilience faster, and more efficiently. You will also be able to see this in action, in our case study with the NFL (National Football League).

Later on, we get into some specifics about how Cisco can help you build security resilience across four key areas: risk reduction, visibility, mitigating insider threats, and what to do with actionable intelligence.

Plus, we share some security resilience success principles from other organizations around the world.

Please check out the e-book when you have a moment. I hope the stories, videos and words have meaning for you, and can help your organization as it prepares to meet its current challenges and opportunities.

And finally, remember that with the right security partner, your organization can adapt to change with speed and precision, making informed decisions with the right context at the right time.

Learn more about how Cisco Secure can help you build your resilience strategy.