For at least the third time in its existence, OGUsers — a forum overrun with people looking to buy, sell and trade access to compromised social media accounts — has been hacked. 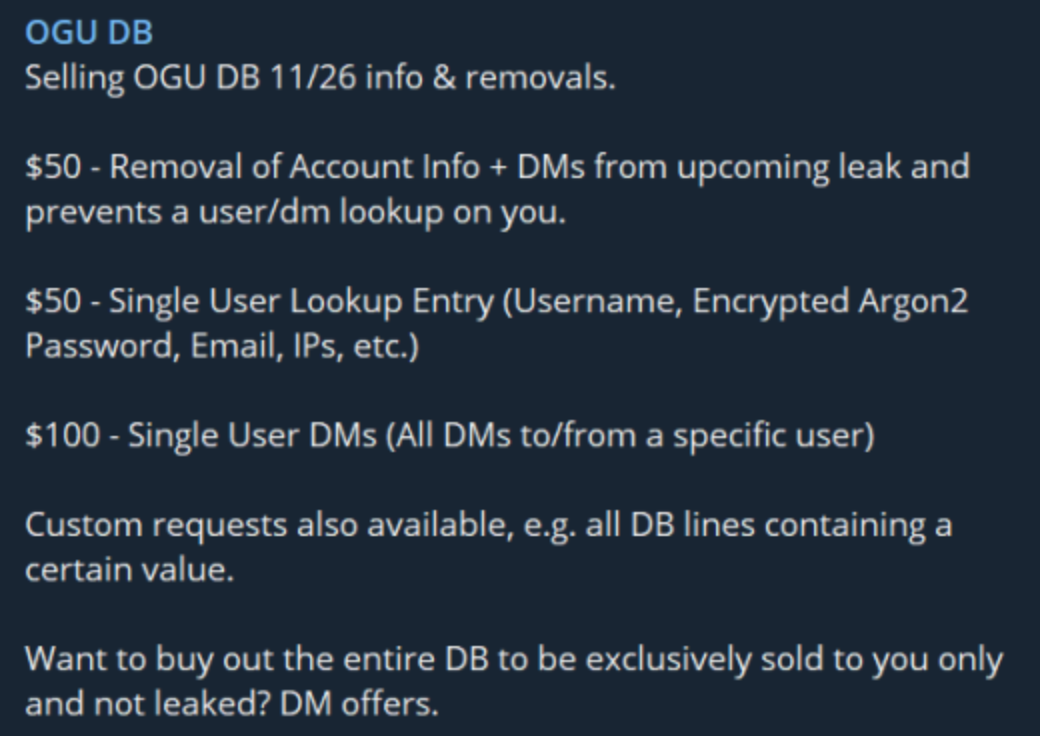 An offer by the apparent hackers of OGUsers, offering to remove account information from the eventual database leak in exchange for payment.

Roughly a week ago, the OGUsers homepage was defaced with a message stating the forum’s user database had been compromised. The hack was acknowledged by the forum’s current administrator, who assured members that their passwords were protected with a password obfuscation technology that was extremely difficult to crack.

But unlike in previous breaches at OGUsers, the perpetrators of this latest incident have not yet released the forum database. In the meantime, someone has been taunting forum members, saying they can have their profiles and private messages removed from an impending database leak by paying between $50 and $100.

OGUsers was hacked at least twice previously, in May 2019 and again in March 2020. In the wake of both incidents, the compromised OGUsers databases were made available for public download.

The leaked databases have been useful in reconstructing who’s behind several high-profile incidents involving compromised social media accounts and virtual currency heists that leveraged SIM swapping, a crime that centers around convincing mobile phone company employees to transfer ownership of the target’s phone number to a device the attackers control.

For example, when several high-profile Twitter accounts were hacked in July 2020 and used to promote bitcoin scams, the profile and private message data from previous OGUser forum compromises proved invaluable in piecing together the “who” behind that scam.

The hacker handles featured in the defacement message left on OGUsers — “Chinese” and “Disco” — correspond to two nicknames used by banned OGUser members who have been trying to generate interest for their own forum that seeks to emulate OGUsers.

Disco, a.k.a “Discoli” a.k.a. “Disco Dog,” is a young man from the United Kingdom who has marketed an automated bot program and service advertised as a way for customers to “cash out” illicit access to OneVanilla Visa prepaid card accounts using PayPal. The sane individual also earlier this year founded a corporation in the U.K. called Disco Payments.

Reached via Twitter, Discoli said he and his friends hacked OGUsers via an outdated plugin used by the site. But he claims they have no plans to sell the stolen user data, and said the company was registered as a joke.

“I had a sort of feud with the administrator in the past but this one was more for fun,” Discoli said. “Not too interested in doing damage by releasing database or anything like that.”

As I noted the first time OGUsers got hacked, it’s difficult not to admit feeling a bit of schadenfreude in the continued exposure of a community that has largely specialized in hacking others. Or perhaps in the case of OGUsers, the sentiment may more aptly be described as “schadenfraud.”