Why Paper Receipts are Money at the Drive-Thru

Why Paper Receipts are Money at the Drive-Thru

Check out this handmade sign posted to the front door of a shuttered Jimmy John’s sandwich chain shop in Missouri last week. See if you can tell from the store owner’s message what happened. 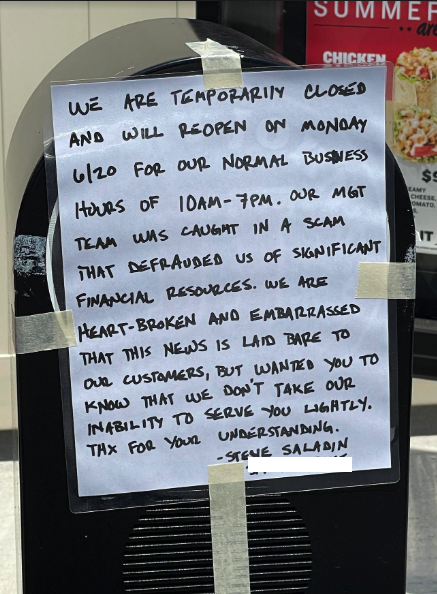 If you guessed that someone in the Jimmy John’s store might have fallen victim to a Business Email Compromise (BEC) or “CEO fraud” scheme — wherein the scammers impersonate company executives to steal money — you’d be in good company.

In fact, that was my initial assumption when a reader in Missouri shared this photo after being turned away from his favorite local sub shop. But a conversation with the store’s owner Steve Saladin brought home the truth that some of the best solutions to fighting fraud are even more low-tech than BEC scams.

Visit any random fast-casual dining establishment and there’s a good chance you’ll see a sign somewhere from the management telling customers their next meal is free if they don’t receive a receipt with their food. While it may not be obvious, such policies are meant to deter employee theft.

You can probably guess by now that this particular Jimmy John’s franchise — in Sunset Hills, Mo. — was among those that chose not to incentivize its customers to insist upon receiving receipts. Thanks to that oversight, Saladin was forced to close the store last week and fire the husband-and-wife managers for allegedly embezzling nearly $100,000 in cash payments from customers.

Saladin said he began to suspect something was amiss after he agreed to take over the Monday and Tuesday shifts for the couple so they could have two consecutive days off together. He said he noticed that cash receipts at the end of the nights on Mondays and Tuesdays were “substantially larger” than when he wasn’t manning the till, and that this was consistent over several weeks.

Then he had friends proceed through his restaurant’s drive-thru, to see if they received receipts for cash payments.

“One of [the managers] would take an order at the drive-thru, and when they determined the customer was going to pay with cash the other would make the customer’s change for it, but then delete the order before the system could complete it and print a receipt,” Saladin said.

Saladin said his attorneys and local law enforcement are now involved, and he estimates the former employees stole close to $100,000 in cash receipts. That was on top of the $115,000 in salaries he paid in total each year to both employees. Saladin also has to figure out a way to pay his franchisor a fee for each of the stolen transactions.

Now Saladin sees the wisdom of adding the receipt sign, and says all of his stores will soon carry a sign offering $10 in cash to any customers who report not receiving a receipt with their food.

Many business owners are reluctant to involve the authorities when they discover that a current or former employee has stolen from them. Too often, organizations victimized by employee theft shy away from reporting it because they’re worried that any resulting media coverage of the crime will do more harm than good.

But there are discrete ways to ensure embezzlers get their due. A few years back, I attended a presentation from an investigator with the criminal division of the U.S. Internal Revenue Service (IRS) who suggested that any embezzling victims seeking a discrete law enforcement response should simply contact the IRS.

The agent said the IRS is obligated to investigate all notifications it receives from employers about unreported income, but that embezzling victims often neglect to even notify the agency. That’s a shame, he said, because under U.S. federal law, anyone who willfully attempts to evade or defeat taxes can be charged with a felony, with penalties including up to $100,000 in fines, up to five years in prison, and the costs of prosecution.