Some of more tech-savvy Democrats in the U.S. Senate are asking the Federal Trade Commission (FTC) to investigate identity-proofing company ID.me for “deceptive statements” the company and its founder allegedly made over how they handle facial recognition data collected on behalf of the Internal Revenue Service, which until recently required anyone seeking a new IRS account online to provide a live video selfie to ID.me. 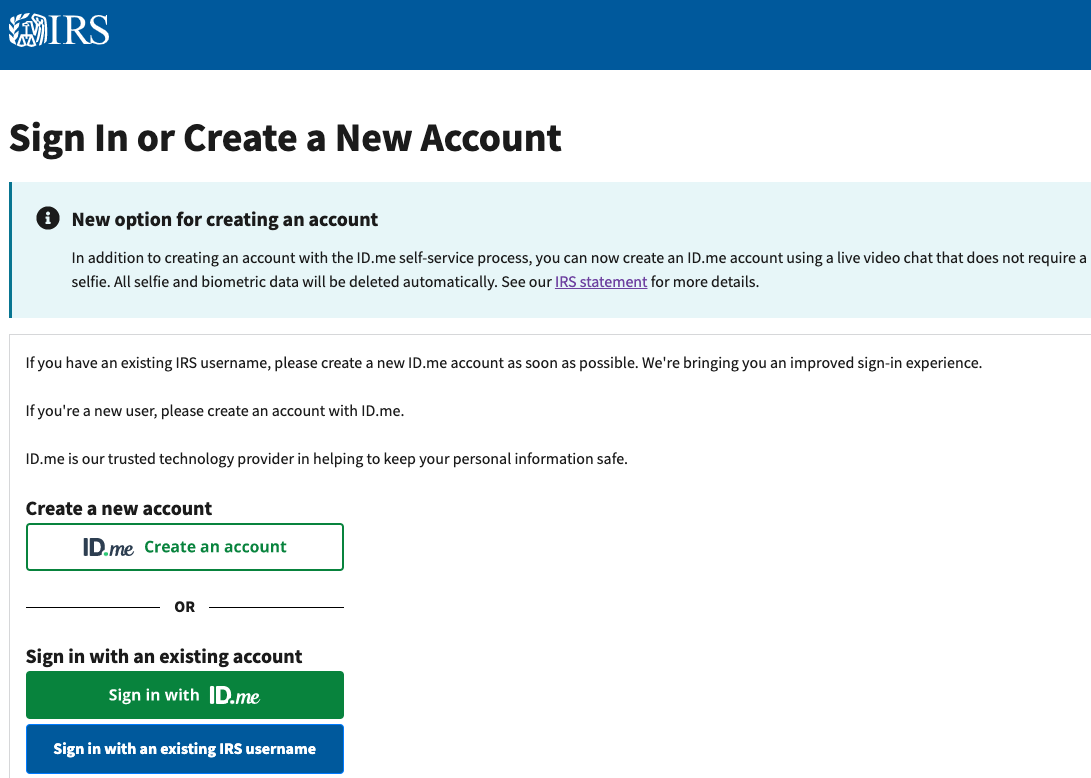 In a letter to FTC Chair Lina Khan, the Senators charge that ID.me’s CEO Blake Hall has offered conflicting statements about how his company uses the facial scan data it collects on behalf of the federal government and many states that use the ID proofing technology to screen applicants for unemployment insurance.

The lawmakers say that in public statements and blog posts, ID.me has frequently emphasized the difference between two types of facial recognition: One-to-one, and one-to-many. In the one-to-one approach, a live video selfie is compared to the image on a driver’s license, for example. One-to-many facial recognition involves comparing a face against a database of other faces to find any potential matches.

Americans have particular reason to be concerned about the difference between these two types of facial recognition, says the letter to the FTC, signed by Sens. Cory Booker (D-N.J.), Edward Markey (D-Mass.), Alex Padilla (D-Calif.), and Ron Wyden (D-Ore.):

“While one-to-one recognition involves a one-time comparison of two images in order to confirm an applicant’s identity, the use of one-to-many recognition means that millions of innocent people will have their photographs endlessly queried as part of a digital ‘line up.’ Not only does this violate individuals’ privacy, but the inevitable false matches associated with one-to-many recognition can result in applicants being wrongly denied desperately-needed services for weeks or even months as they try to get their case reviewed.”

“This risk is especially acute for people of color: NIST’s Facial Recognition Vendor Test found that many facial recognition algorithms have rates of false matches that are as much as 100 times higher for individuals from countries in West Africa, East Africa and East Asia than for individuals from Eastern European countries. This means Black and Asian Americans could be disproportionately likely to be denied benefits due to a false match in a one-to-many facial recognition system.”

The lawmakers say that throughout the latter half of 2021, ID.me published statements and blog posts stating it did not use one-to-many facial recognition and that the approach was “problematic” and “tied to surveillance operations.” But several days after a Jan. 16, 2022 post here about the IRS’s new facial ID requirement went viral and prompted a public backlash, Hall acknowledged in a LinkedIn posting that ID.me does use one-to-many facial recognition.

“Within days, the company edited the numerous blog posts and white papers on its website that previously stated the company did not use one-to-many to reflect the truth,” the letter alleges. “According to media reports, the company’s decision to correct its prior misleading statements came after mounting internal pressure from its employees.”

Cyberscoop’s Tonya Riley published excerpts from internal ID.me employee Slack messages wherein some expressed dread and unease with the company’s equivocation on its use of one-to-many facial recognition. 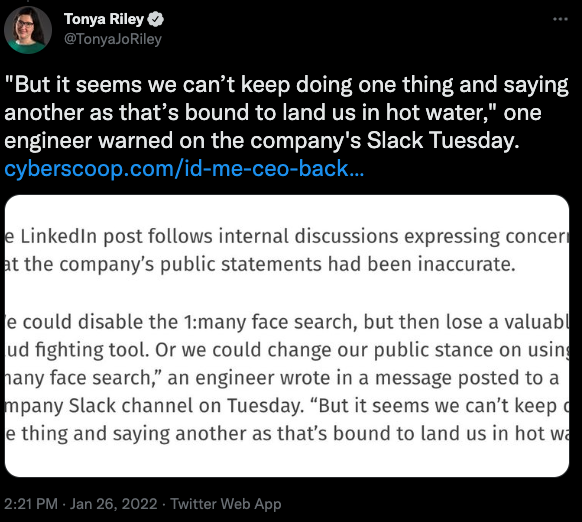 In February, the IRS announced it would no longer require facial scans or other biometric data from taxpayers seeking to create an account at the agency’s website. The agency also pledged that any biometric data shared with ID.me would be permanently deleted.

But the IRS still requires new account applicants to sign up with either ID.me or Login.gov, a single sign-on solution already used to access 200 websites run by 28 federal agencies. It also still offers the option of providing a live selfie for verification purposes, although the IRS says this data will be deleted automatically.

Asked to respond to concerns raised in the letter from Senate lawmakers, ID.me instead touted its successes in stopping fraud.

“Five state workforce agencies have publicly credited ID.me with helping to prevent $238 billion dollars in fraud,” the statement reads. “Conditions were so bad during the pandemic that the deputy assistant director of the FBI called the fraud ‘an economic attack on the United States.’ ID.me played a critical role in stopping that attack in more than 20 states where the service was rapidly adopted for its equally important ability to increase equity and verify individuals left behind by traditional options. We look forward to cooperating with all relevant government bodies to clear up any misunderstandings.”

As Cyberscoop reported on Apr. 14, the House Oversight and Reform Committee last month began an investigation into ID.me’s practices, with committee chairwoman Carolyn Maloney (D-N.Y.) saying the committee’s questions to the company would help shape policy on how the government wields facial recognition technology.

A copy of the letter the senators sent to the FTC is here (PDF).