A network intrusion at the International Committee for the Red Cross (ICRC) in January led to the theft of personal information on more than 500,000 people receiving assistance from the group. KrebsOnSecurity has learned that the email address used by a cybercriminal actor who offered to sell the stolen ICRC data also was used to register multiple domain names the FBI says are tied to a sprawling media influence operation originating from Iran.

On Jan. 19, the ICRC disclosed the compromise of servers hosting the personal information of more than 500,000 people receiving services from the Red Cross and Red Crescent Movement. The ICRC said the hacked servers contained data relating to the organization’s Restoring Family Links services, which works to reconnect people separated by war, violence, migration and other causes.

The same day the ICRC went public with its breach, someone using the nickname “Sheriff” on the English-language cybercrime forum RaidForums advertised the sale of data from the Red Cross and Red Crescent Movement. Sheriff’s sales thread suggests the ICRC was asked to pay a ransom to guarantee the data wouldn’t be leaked or sold online.

“Mr. Mardini, your words have been heard,” Sheriff wrote, posting a link to the Twitter profile of ICRC General Director Robert Mardini and urging forum members to tell him to check his email. “Check your email and send a figure you can pay.” 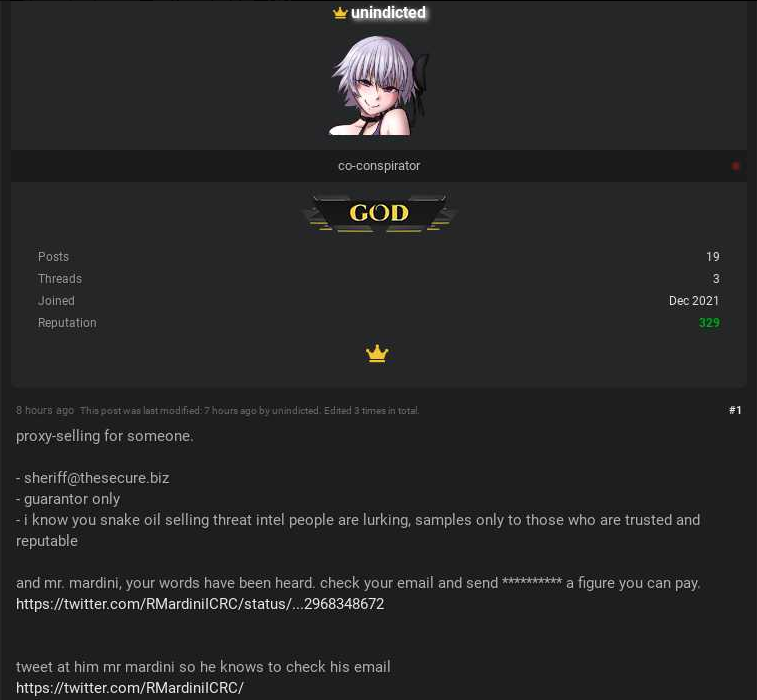 In their online statement about the hack (updated on Feb. 7) the ICRC said it had not had any contact with the hackers, and no ransom demand had been made.

“In line with our standing practice to engage with any actor who can facilitate or impede our humanitarian work, we are willing to communicate directly and confidentially with whoever may be responsible for this operation to impress upon them the need to respect our humanitarian action,” the ICRC statement reads.

Asked to comment on Sheriff’s claims, the ICRC issued the following statement:

“Right now, we do not have any conclusive evidence that this information from the data breach has been published or is being traded. Our cybersecurity team has looked into any reported allegation of data being available on the dark web.”

The email address that Sheriff used to register at RaidForums — kelvinmiddelkoop@hotmail.com — appears in an affidavit for a search warrant filed by the FBI roughly a year ago. That FBI warrant came on the heels of an investigation published by security firm FireEye, which examined an Iranian-based network of inauthentic news sites and social media accounts aimed at the United States., U.K. and other western audiences.

“This operation is leveraging a network of inauthentic news sites and clusters of associated accounts across multiple social media platforms to promote political narratives in line with Iranian interests,” FireEye researchers wrote. “These narratives include anti-Saudi, anti-Israeli, and pro-Palestinian themes, as well as support for specific U.S. policies favorable to Iran.” 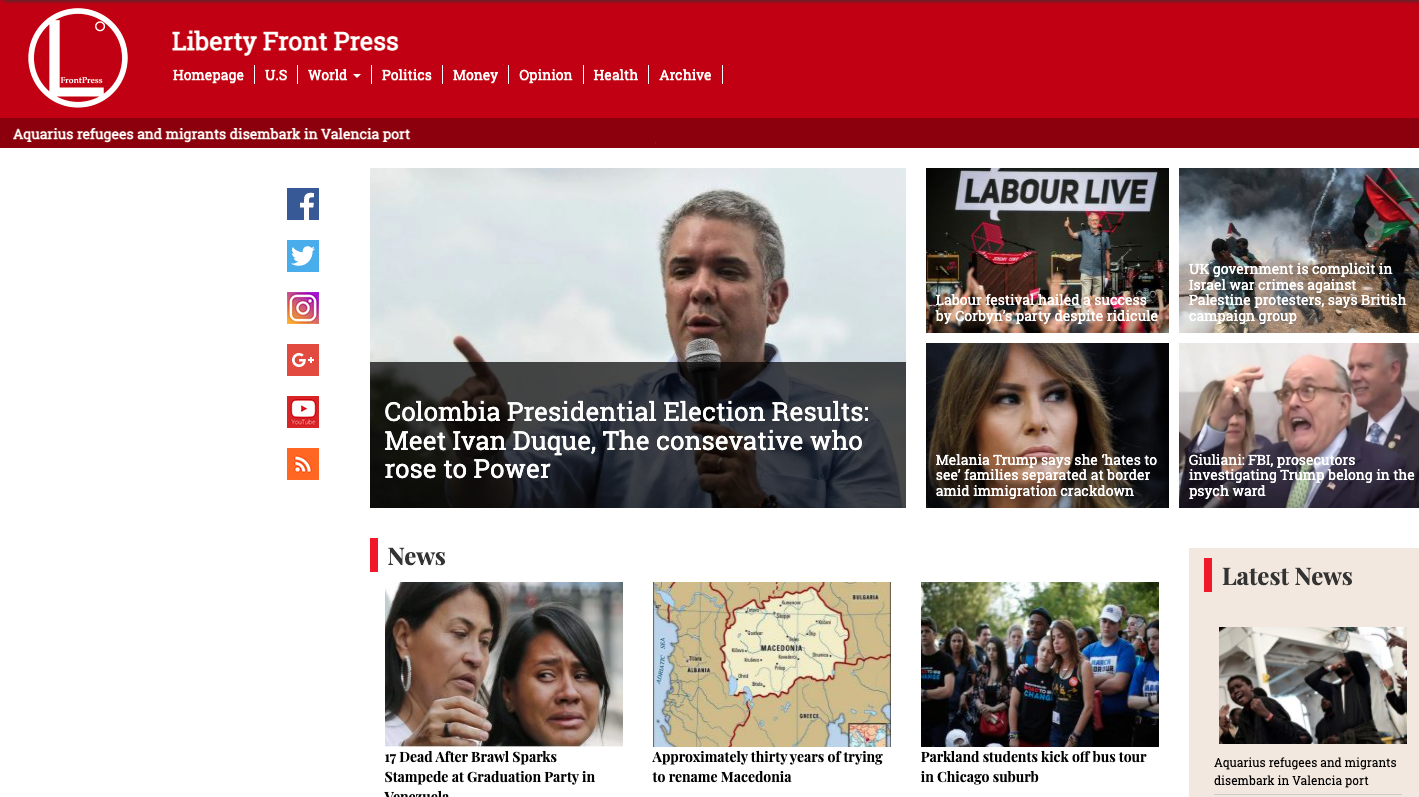 The FBI says the domains registered by the email address tied to Sheriff’s RaidForums account were used in service of the Liberty Front Press, a network of phony news sites thought to originate from Iran.

According to the FBI affidavit, the address kelvinmiddelkoop@hotmail.com was used to register at least three different domains for phony news sites, including awdnews[.]com, sachtimes[.]com, and whatsupic[.]com. A reverse WHOIS search on that email address at DomainTools.com (an advertiser on this site) shows it was used to register 17 domains between 2012 and 2021, including moslimyouthmedia[.]com, moslempress[.]com, and realneinovosti[.]net.

A review of Sheriff’s postings to RaidForum reveals he has used two other nicknames since registering on the forum in December 2021: “Unindicted,” and “threat_actor.” In several posts, Sheriff taunts one FireEye employee by name.

In a Jan. 3, 2022 post, Sheriff says their “team” is seeking licenses for the Cobalt Strike penetration testing tool, and that they’re prepared to pay $3,000 – $4,000 per license. Cobalt Strike is a legitimate security product that is sold only to vetted partners, but compromised or ill-gotten Cobalt Strike licenses frequently are used in the run-up to ransomware attacks.

“We will buy constantly, make contact,” Sheriff advised. “Do not ask if we still need)) the team is interested in licenses indefinitely.”

On Jan. 4, 2022, Sheriff tells RaidForums that their team is in need of access to a specific data broker platform, and offers to pay as much as $35,000 for that access. Sheriff says they will only accept offers that are guaranteed through the forum’s escrow account.

The demand for escrow in a sales thread is almost universally a sign that someone means business and they are ready to transact on whatever was advertised or requested. That’s because escrow transactions necessarily force the buyer to make a deposit with the forum’s administrators before proceeding on any transaction.

Sheriff appears to have been part of a group on RaidForums that offered to buy access to organizations that could be extorted with ransomware or threatened with the publication of stolen data (PDF screenshot from threat intelligence firm KELA). In a “scam report” filed against Sheriff by another RaidForums member on Dec. 31, 2021, the claimant says Sheriff bought access from them and agreed to pay 70 percent of any ransom paid by the victim organization.

Instead, the claimant maintains, Sheriff only paid them roughly 25 percent. “The company pay $1.35 million ransom and only payment was made of $350k to me, so i ask for $600k to fix this dispute,” the affiliate wrote.

In another post on RaidForums, a user aptly named “FBI Agent” advised other denizens to steer clear of Sheriff’s ransomware affiliate program, noting that transacting with this person could run afoul of sanctions from the U.S. Department of the Treasury’s Office of Foreign Assets Control (OFAC) that restrict commerce with people residing in Iran.

“To make it clear, we don’t work with individuals under the OFAC sanctions list, which @Sheriff is under,” the ransomware affiliate program administrator wrote in reply.

RaidForums says Sheriff was referred to the forum by Pompompurin, the same hacker who used a security hole in the FBI’s website last year to blast a phony alert about a cybercrime investigation to state and local authorities. Pompompurin has been quite active on RaidForums for the past few years, frequently posting databases from newly-hacked organizations, and selling access to stolen information.

Reach via Twitter, Pompompurin said they had no idea who might have offered money and information on Sheriff, and that they would never “snitch” on Sheriff.

“I know who he is but I’m not saying anything,” Pompompurin replied.

The information about Sheriff was brought to my attention by an anonymous person who initially contacted KrebsOnSecurity saying they wanted to make a donation to the publication. When the person offering the gift asked if it was okay that the money came from a ransomware transaction, I naturally declined the offer.

That person then proceeded to share the information about the connection between Sheriff’s email address and the FBI search warrant, as well as the account’s credentials.

The same identity approached several other security researchers and journalists, one of whom was able to validate that the kelvinmiddelkoop@hotmail.com address actually belonged to Sheriff’s account. Those researchers were likewise offered tainted donations, except the individual offering the donation seemed to use a different story with each person about who they were or why they were offering money. Others contacted by the same anonymous user said they also received unsolicited details about Sheriff.

It seems clear that whoever offered that money and information has their own agenda, which may also involve attempts to make members of the news media appear untrustworthy for agreeing to accept stolen funds. However, the information they shared checks out, and since there is precious little public reporting on the source of the ICRC intrusion, the potential connection to hacker groups based in Iran seems worth noting.