SMS About Bank Fraud as a Pretext for Voice Phishing

SMS About Bank Fraud as a Pretext for Voice Phishing

Most of us have probably heard the term “smishing” — which is a portmanteau for traditional phishing scams sent through SMS text messages. Smishing messages usually include a link to a site that spoofs a popular bank and tries to siphon personal information. But increasingly, phishers are turning to a hybrid form of smishing — blasting out linkless text messages about suspicious bank transfers as a pretext for immediately calling and scamming anyone who responds via text.

KrebsOnSecurity recently heard from a reader who said his daughter received an SMS that said it was from her bank, and inquired whether she’d authorized a $5,000 payment from her account. The message said she should reply “Yes” or “No,” or 1 to decline future fraud alerts.

Since this seemed like a reasonable and simple request — and she indeed had an account at the bank in question — she responded, “NO.” 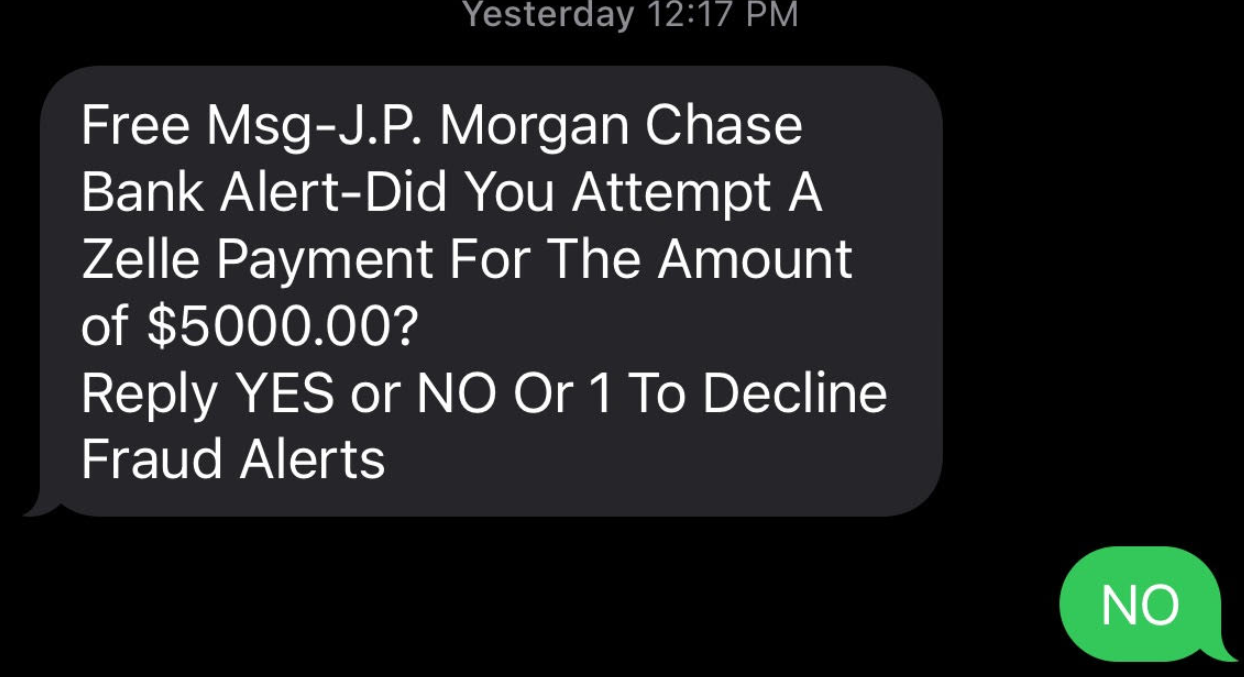 “When she replied ‘no,’ someone called immediately, and the caller ID said ‘JP Morgan Chase’,” reader Kris Stevens told KrebsOnSecurity. “The person on the phone said they were from the fraud department and they needed to help her secure her account but needed information from her to make sure they were talking to the account owner and not the scammer.”

Thankfully, Stevens said his daughter had honored the gold rule regarding incoming phone calls about fraud: When In Doubt, Hang up, Look up, and Call Back.

“She knows the drill so she hung up and called Chase, who confirmed they had not called her,” he said. “What was different about this was it was all very smooth. No foreign accents, the pairing of the call with the text message, and the fact that she does have a Chase account.”

The remarkable aspect of these phone-based phishing scams is typically the attackers never even try to log in to the victim’s bank account. The entirety of the scam takes place over the phone.

We don’t know what the fraudsters behind this clever hybrid SMS/voice phishing scam intended to do with the information they might have coaxed from Stevens’ daughter. But in previous stories and reporting on voice phishing schemes, the fraudsters used the phished information to set up new financial accounts in the victim’s name, which they then used to receive and forward large wire transfers of stolen funds.

Even many security-conscious people tend to focus on protecting their online selves, while perhaps discounting the threat from less technically sophisticated phone-based scams. In 2020 I told the story of “Mitch” — the tech-savvy Silicon Valley executive who got voice phished after he thought he’d turned the tables on the scammers.

Unlike Stevens’ daughter, Mitch didn’t hang up with the suspected scammers. Rather, he put them on hold. Then Mitch called his bank on the other line and asked if their customer support people were in fact engaged in a separate conversation with him over the phone.

The bank replied that they were indeed speaking to the same customer on a different line at that very moment. Feeling better, Mitch got back on the line with the scammers. What Mitch couldn’t have known at that point was that a member of the fraudster’s team simultaneously was impersonating him on the phone with the bank’s customer service people.

So don’t be Mitch. Don’t try to outsmart the crooks. Just remember this anti-fraud mantra, and maybe repeat it a few times in front of your friends and family: When in doubt, hang up, look up, and call back. If you believe the call might be legitimate, look up the number of the organization supposedly calling you, and call them back.

And I suppose the same time-honored advice about not replying to spam email goes doubly for unsolicited text messages: When in doubt, it’s best not to respond.