Communications giant T-Mobile said today it is investigating the extent of a breach that hackers claim has exposed sensitive personal data on 100 million T-Mobile USA customers, in many cases including the name, Social Security number, address, date of birth, phone number, security PINs and details that uniquely identify each customer’s mobile device.

On Sunday, Vice.com broke the news that someone was selling data on 100 million people, and that the data came from T-Mobile. In a statement published on its website today, the company confirmed it had suffered an intrusion involving “some T-Mobile data,” but said it was too soon in its investigation to know what was stolen and how many customers might be affected. 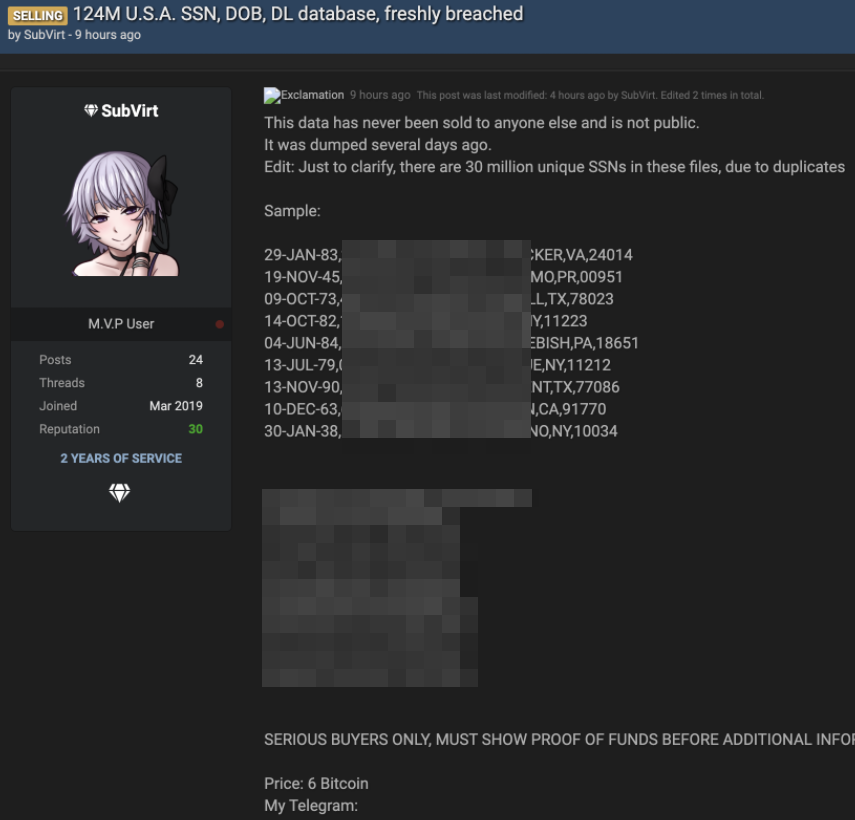 “We are confident that the entry point used to gain access has been closed, and we are continuing our deep technical review of the situation across our systems to identify the nature of any data that was illegally accessed,” the statement continued. “This investigation will take some time but we are working with the highest degree of urgency. Until we have completed this assessment we cannot confirm the reported number of records affected or the validity of statements made by others.”

The intrusion came to light on Twitter when the account @und0xxed started tweeting the details. Reached via direct message, Und0xxed said they were not involved in stealing the databases but was instead in charge of finding buyers for the stolen T-Mobile customer data.

Und0xxed said the hackers found an opening in T-Mobile’s wireless data network that allowed access to two of T-Mobile’s customer data centers. From there, the intruders were able to dump a number of customer databases totaling more than 100 gigabytes.

They claim one of those databases holds the name, date of birth, SSN, drivers license information, plaintext security PIN, address and phone number of 36 million T-Mobile customers in the United States — all going back to the mid-1990s.

The hacker(s) claim the purloined data also includes IMSI and IMEI data for 36 million customers. These are unique numbers embedded in customer mobile devices that identify the device and the SIM card that ties that customer’s device to a telephone number.

“If you want to verify that I have access to the data/the data is real, just give me a T-Mobile number and I’ll run a lookup for you and return the IMEI and IMSI of the phone currently attached to the number and any other details,” @und0xxed said. “All T-Mobile USA prepaid and postpaid customers are affected; Sprint and the other telecoms that T-Mobile owns are unaffected.”

Other databases allegedly accessed by the intruders included one for prepaid accounts, which had far fewer details about customers.

“Prepaid customers usually are just phone number and IMEI and IMSI,” Und0xxed said. “Also, the collection of databases includes historical entries, and many phone numbers have 10 or 20 IMEIs attached to them over the years, and the service dates are provided. There’s also a database that includes credit card numbers with six digits of the cards obfuscated.”

In 2015, a computer breach at big three credit bureau Experian exposed the Social Security numbers and other data on 15 million people who applied for financing from T-Mobile.

Like other mobile providers, T-Mobile is locked in a constant battle with scammers who target its own employees in SIM swapping attacks and other techniques to wrest control over employee accounts that can provide backdoor access to customer data. In at least one case, retail store employees were complicit in the account takeovers.

The Twitter profile for the account @Und0xxed includes a shout out to @IntelSecrets, the Twitter account of a fairly elusive hacker who also has gone by the handles IRDev and V0rtex. Asked if @IntelSecrets was involved in the T-Mobile intrusion, @und0xxed confirmed that it was.

The IntelSecrets nicknames correspond to an individual who has claimed responsibility for modifying the source code for the Mirai “Internet of Things” botnet to create a variant known as “Satori,” and supplying it to others who used it for criminal gain and were later caught and prosecuted. Like Kenny “NexusZeta” Schuchmann, who pleaded guilty in 2019 to operating the Satori botnet. Two other young men have been charged in connection with Satori — but not IntelSecrets.

How do we know all this about IntelSecrets/IRDev/V0rtex? That identity has acknowledged as much in a series of bizarre lawsuits filed by a person who claims their real name is John Erin Binns. The same Binns identity operates the website intelsecrets[.]ru.

On that site, Binns claims he fled to Germany and Turkey to evade prosecution in the Satori case, only to be kidnapped in Turkey and subjected to various forms of psychological and physical torture. According to Binns, the U.S. Central Intelligence Agency (CIA) falsely told their counterparts in Turkey that he was a supporter or member of the Islamic State (ISIS), a claim he says led to his alleged capture and torture by the Turks.

Since then, Binns has filed a flood of lawsuits naming various federal agencies — including the FBI, the CIA, and the U.S. Special Operations Command (PDF), demanding that the government turn over information collected about him and seeking restitution for his alleged kidnapping at the hands of the CIA.

Speaking to the researcher Alon Gal (@underthebreach), the hackers responsible for the T-Mobile intrusion said they did it to “retaliate against the US for the kidnapping and torture of John Erin Binns in Germany by the CIA and Turkish intelligence agents in 2019. We did it to harm US infrastructure.”