Financial services giant Intuit this week informed 1.4 million small businesses using its QuickBooks Online Payroll and Intuit Online Payroll products that their payroll information will be shared with big-three consumer credit bureau Equifax starting later this year unless customers opt out by the end of this month.

Intuit says the change is tied to an “exciting” and “free” new service that will let millions of small business employees get easy access to employment and income verification services when they wish to apply for a loan or line of credit. 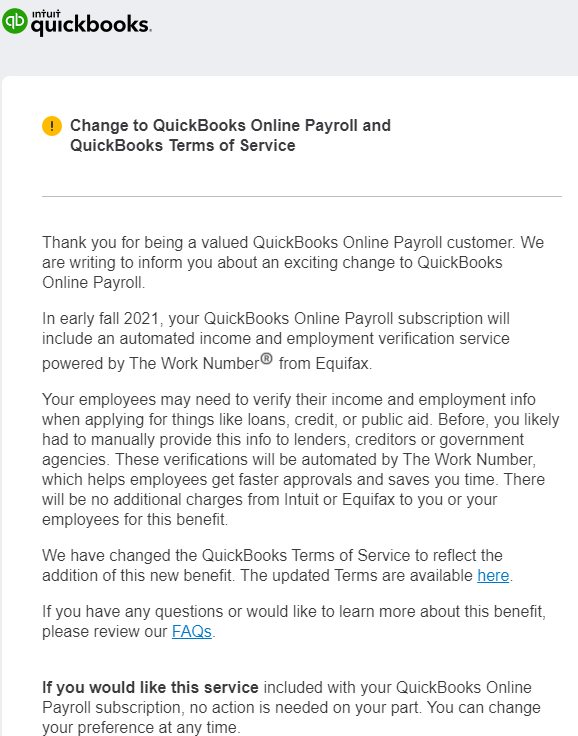 “In early fall 2021, your QuickBooks Online Payroll subscription will include an automated income and employment verification service powered by The Work Number from Equifax,” reads the Intuit email, which includes a link to the new Terms of Service. “Your employees may need to verify their income and employment info when applying for things like loans, credit, or public aid. Before, you likely had to manually provide this info to lenders, creditors or government agencies. These verifications will be automated by The Work Number, which helps employees get faster approvals and saves you time.”

Equifax’s 2017 megabreach that exposed the personal and financial details of 145.5 million Americans may have shocked the public, but it did little to stop more than a million employers from continuing to sell Equifax their employee payroll data, Bloomberg found in late 2017.

“The workforce-solutions unit is now among Equifax’s fastest-growing businesses, contributing more than a fifth of the firm’s $3.1 billion of revenue last year,” wrote Jennifer Surane. “Using payroll data from government agencies and thousands of employers — including a vast majority of Fortune 500 companies — Equifax has cultivated a database of 300 million current and historic employment records, according to regulatory filings.”

QuickBooks Online user Anthony Citrano posted on Twitter about receiving the notice, noting that the upcoming changes had yet to receive any attention in the financial or larger media space.

“The way I read the terms, Equifax gets to proactively collect all payroll data just in case they need to share it later — similar to how they already handle credit reporting,” said Citrano, who is founder and CEO of Acquicent, a company that issues non-fungible tokens (NFTs). “And that feels like a disaster waiting to happen, especially given Equifax’s history.”

But Citrano said this move by Intuit will incorporate a large number of fairly small businesses.

“ADP participates in some way already, but QuickBooks Online jumping on the bandwagon means a lot of employees of small to mid-sized businesses are going to be affected,” he said.

Why might small businesses want to think twice before entrusting Equifax with their payroll data? The answer is the company doesn’t have a great track record of protecting that information.

In the days following the 2017 breach at Equifax, KrebsOnSecurity pointed out that The Work Number made it a little too easy for anyone to learn your salary history. At the time, all you needed to view someone’s entire work and salary history was their Social Security number and date of birth. It didn’t help that for roughly half the U.S. population, both of the pieces of information were known to be in the possession of criminals behind the breach.

Equifax responded by taking down its Work Number website until it was able to include additional authentication requirements, saying anyone could opt out of Equifax revealing their salary history.

Equifax’s security improvements included the addition of four multiple-guess questions whose answers were based on publicly-available data. But these requirements were easily bypassed, as evidenced by a previous breach at Equifax’s employment division.

The Work Number is a user-paid verification of employment database created by TALX Corp., a data broker acquired by Equifax in 2007. Four months before the epic 2017 breach became public, KrebsOnSecurity broke the news that fraudsters who specialize in tax refund fraud had been successfully guessing the answers to those secret questions to reset TALX account PINs, which then let them view past W-2 tax forms for employees at many Fortune 500 companies.

Intuit says affected customers that do not want this new service included must update their preferences and opt-out by July 31, 2021. Otherwise, they will be automatically will be opted in. According to Intuit, customers can opt out by following these steps:

3. In the Shared data section, select the pencil and uncheck the box.