8 Reasons why you should pick Cisco Viptela SDWAN

8 Reasons why you should pick Cisco Viptela SDWAN

20 years ago, I used to work as a network engineer for a fast-growing company that had multiple data centers and many remote offices, and I remember all the work required to simply onboard a remote site. Basically, it took months of planning and execution which included ordering circuits, getting connectivity up and spending hours, and sometimes days, deploying complex configurations to secure the connectivity by establishing encrypted tunnels and steering the right traffic across them. Obviously, all this work was manual. At the time I was very proud of the fact tht I was able to do such complex configurations that required so many lines of CLI but that was the way things were done.

During the decade that followed, we saw a slew of WAN and encryption technologies become available to help with the demand and scale for secure network traffic. MPLS, along with frame Relay, became extremely popular and IPsec-related encryption technologies became the norm. All this was predicated on the fact that most traffic was destined to one clear location and that is the data center that every company had to build to store all its jewels including applications, databases and critical data. The data center also served as the gateway to the internet. 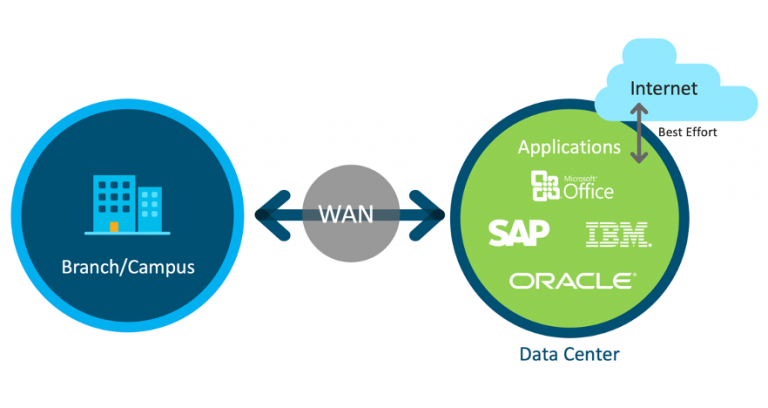 From a security perspective, the model was simple and had clear boundaries. All infrastructure within the enterprise was trusted and everything outside including the internet and DMZ was labeled as untrusted, so firewalls and other proper security devices were deployed at these boundaries mainly at the data center in order to protect the organization.

The decade that followed brought some disrupting trends. We moved from desktops to laptops and then mobile devices became the norm. We became more dependent on voice and video services which meant regular infrastructure updates were frequently needed to deal with increasing demands for bandwidth.

As WAN services became more critical, businesses had to invest in expensive redundant links of which the secondary link was sitting idle designed as a backup link in case of a primary link failure. Although there were some challenges, this model worked out pretty well for some time.

The rise of Cloud Computing

Although Cloud Computing has been around since the early 2000s, rapid adoption did not materialize until recently due to multiple factors including general lack of trust and security concerns. Over the last 5 years, however, a new trend picked up and many organizations started to see benefits to cloud computing that allowed for cost saving and more flexibility. For example, a small company can now have their servers run on a cloud Service provider (CSP) the likes of AWS or Azure rather than having to spend tons of Capex money to build a data center. Basically, mindsets are changing even in conservative sectors such as Financials as per the following quote from a banking customer.

“In 2020, we left our data centers behind and moved to the public cloud to create exceptional banking experiences for our customers. The agility, scalability and elasticity of the cloud are helping us build the bank of the future”

In addition, Software as a Service (SaaS) is another trend that is also changing the way we consume applications. A long list of critical applications that include Office 365, Salesforce, WebEx, Box and many more are now being served from the cloud.

While moving to the cloud trend has been accelerating over the last 5 years the COVID pandemic has sure made this trend accelerate exponentially and with it the need for a new architecture that is better suited to address these new diverse challenges. 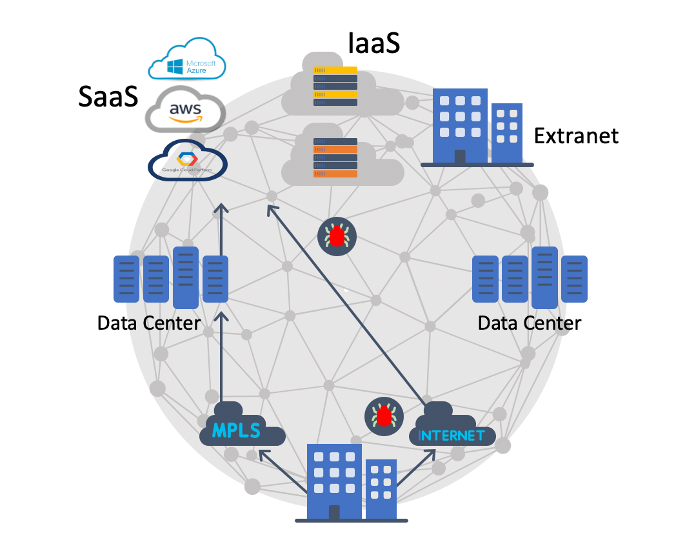 The need for SDWAN

As organizations increasingly adopt SaaS and IaaS, the old model of networking will no longer work for the main reason that services are no longer residing in one place but are now distributed across the internet on multiple clouds. Basically, we can no longer rely on the data center as the gateway to the internet because going that route no longer gives us the optimal path and thus introduces more latency culminating in sub-optimal user application experience. Also Increased traffic at the data center requires expensive links as well as network and security equipment that can support the throughput.

In addition, the customer consumption model for connectivity is changing and rather than spending a lot of money on expensive MPLS links, companies now can utilize their branch backup links or go with cheaper ones at a fraction of the cost. Although direct internet links (DIA) provide a great way to offload noncritical internet traffic, using it beyond that will require those links to be secured and to do so brings more challenge to IT organizations.

Software Defined WAN was introduced to solve all these problems by decoupling the data plane from the control and management plane, creating a secure overlay and, similar to a car GPS, providing the intelligence to route a packet to the right destination avoiding traffic congestion attributed to loss, latency and jitter. Most importantly, it relies on a single management interface that made the provisioning and management of WAN extremely simple.

Cisco acquired Viptela, a leading SDWAN provider in 2017. Since then, Cisco has integrated the solution into its long line of WAN routers, introduced the Catalyst 8K family (a new router platform that was designed specifically for SDWAN and Cloud), added a long list of cloud innovations by working with leading Cloud Service Providers (CSPs) and deployed the solution at thousands of customer sites. In order to better understand the benefit that Cisco Viptela brings let’s breakdown the conversation into the following 8 key areas:

Centralized Management: One of the key benefits that Cisco Viptela provides is the use of centralized management using vManage to not only provision and monitor SDWAN fabric policies but to also provide capabilities to integrate with external systems such as provisioning transit gateways on AWS and automating tunnel creation to a Secure Internet Gateway (SIG) thus providing the administrator with one tool to simplify solution roll out.

Bandwidth Augmentation: The ability to offload traffic from expensive MPLS links can be achieved due to the fact that Viptela SDWAN is link agnostic so multiple internet links can achieve the same availability and performance as a single premium link at the fraction of the price and can still meet the same SLA

Application Performance Optimization: Applications have different requirements when it comes to quality of service.  Some may have issues with little delay, some are sensitive to loss and some behave poorly if there is jitter. SDWAN features such as TCP optimization, DRE and Application-aware routing are among the tools that we can use to get around congestion issues and allows us to deliver optimal quality of experience.

Middle Mile Optimization: Colo presence provides a lot of value to customers that include direct access to CSPs through express routes, allows service chaining and much more. In this situation, Cisco SDWAN extends the fabric and provides a management interface to onboard and manage the environment.

Cloud OnRamp for IaaS: The key benefit of this feature is that it not only allows us to use the same simple flow to automate connectivity to all key Cloud Service Providers which include AWS, Azure and GCP, but once the SDWAN Fabric is extended to the cloud, then customers will get to use all the features available to SDWAN on the Cloud and all configurations can be done from the same vManage Console. In certain cases, the CSP provider network can be used as a backbone for passing site-to-site traffic thus reducing latency to a specific destination.

Cloud onRamp for SaaS: This feature provides optimal experience for SaaS applications by utilizing internal probing and external telemetry received from SaaS application vendors. Microsoft Office 365 offers a great example of this feature. In addition to the probing intelligence built into SDWAN, Microsoft will send key URLs along with new recommendations based on internal dynamic data.

Analytics: The Cisco vAnalytics platform is offered as a Service and provides a graphical interface of the fabric performance with the ability to drill down into specific areas such as network availability, carrier, tunnel and application performance. Other Cisco applications such as Cisco StealthWatch and Cisco ThousandEyes can also be used to provide more analytics.

In summary, as the future of networking turn into the cloud, the internet will now play a critical role similar to the role that LAN played in the past. Cisco Viptela SDWAN a highly reliable and resilient solution with its rich features integrating Cloud optimization, security and advanced analytics can play a major role in helping organizations manage this disruptive WAN phase and will be the foundation for Secure Edge Service Edge (SASE), but that will be another discussion for another blog.