What was the best news you heard so far this month? Mine was learning that KrebsOnSecurity is listed as a restricted competitor by Gartner Inc. [NYSE:IT] — a $4 billion technology goliath whose analyst reports can move markets and shape the IT industry.

Earlier this month, a reader pointed my attention to the following notice from Gartner to clients who are seeking to promote Gartner reports about technology products and services: 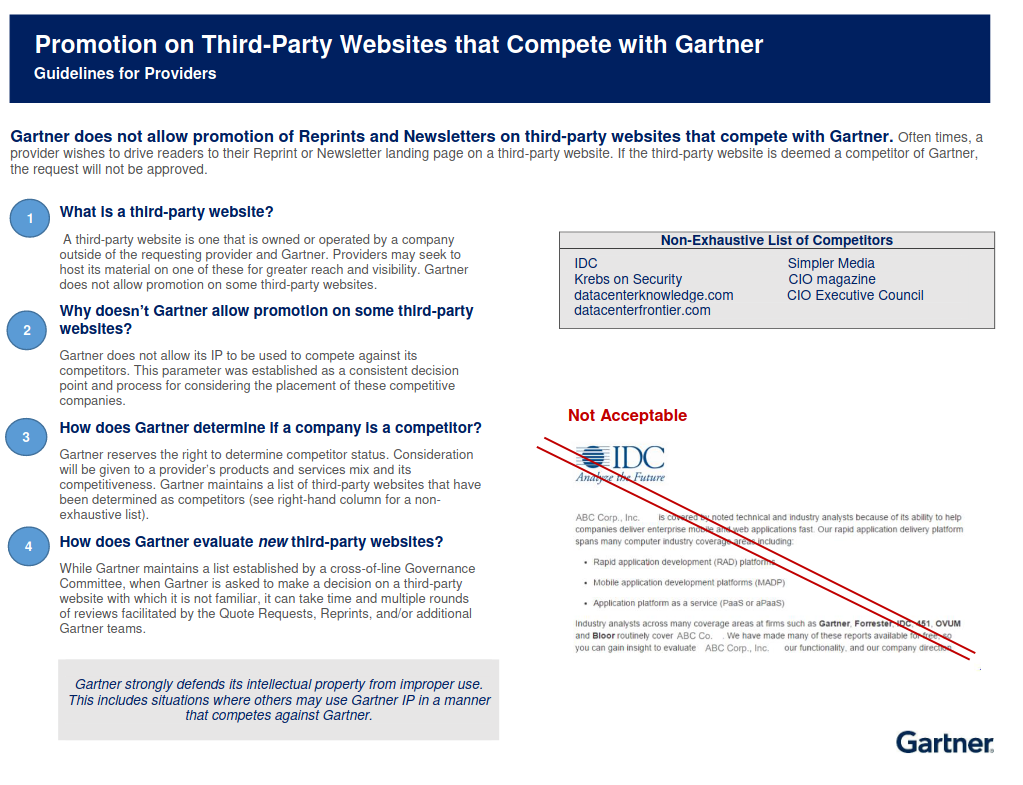 What that notice says is that KrebsOnSecurity is somehow on Gartner’s “non exhaustive list of competitors,” i.e., online venues where technology companies are not allowed to promote Gartner reports about their products and services.

The bulk of Gartner’s revenue comes from subscription-based IT market research. As the largest organization dedicated to the analysis of software, Gartner’s network of analysts are well connected to the technology and software industries. Some have argued that Gartner is a kind of private social network, in that a significant portion of Gartner’s competitive position is based on its interaction with an extensive network of software vendors and buyers.

Either way, the company regularly serves as a virtual kingmaker with their trademark “Magic Quandrant” designations, which rate technology vendors and industries “based on proprietary qualitative data analysis methods to demonstrate market trends, such as direction, maturity and participants.”

The two main subjective criteria upon which Gartner bases those rankings are “the ability to execute” and “completeness of vision.” They also break companies out into categories such as “challengers,” “leaders,” “visionaries” and “niche players.” 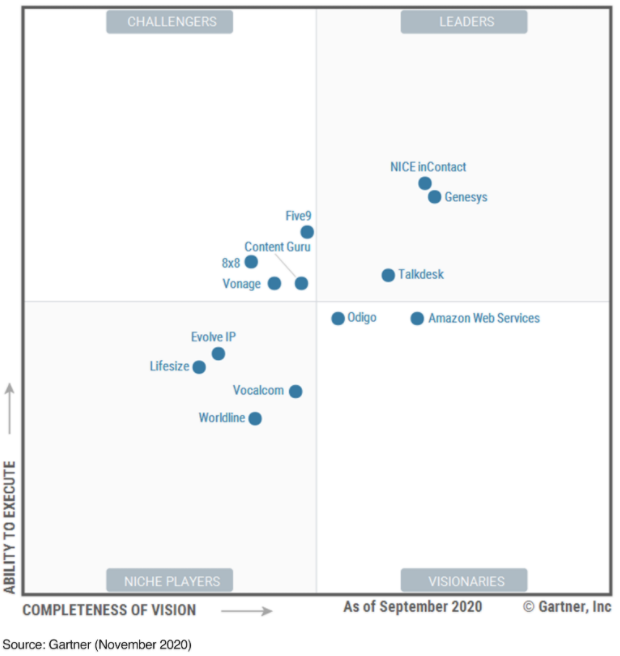 Gartner’s 2020 “Magic Quadrant” for companies that provide “contact center as a service” offerings.

Being listed by Gartner as a competitor has had no discernable financial impact on KrebsOnSecurity, or on its reporting. But I find this designation both flattering and remarkable given that this site seldom promotes technological solutions.

Nor have I ever offered paid consulting or custom market research (although I did give a paid keynote speech at Gartner’s 2015 conference in Orlando, which is still by far the largest crowd I’ve ever addressed).

Rather, KrebsOnSecurity has sought to spread cybersecurity awareness primarily by highlighting the “who” of cybercrime — stories told from the perspectives of both attackers and victims. What’s more, my research and content is available to everyone at the same time, and for free.

I rarely do market predictions (or prognostications of any kind), but in deference to Gartner allow me to posit a scenario in which major analyst firms start to become a less exclusive and perhaps less relevant voice as both an influencer and social network.

For years I have tried to corrupt more of my journalist colleagues into going it alone, noting that solo blogs and newsletters can not only provide a hefty boost from newsroom income, but they also can produce journalism that is just as timely, relevant and impactful.

Those enticements have mostly fallen on deaf ears. Recently, however, an increasing number of journalists from major publications have struck out on their own, some in reportorial roles, others as professional researchers and analysts in their own right.

If Gartner considers a one-man blogging operation as competition, I wonder what they’ll think of the coming collective output from an entire industry of newly emancipated reporters seeking more remuneration and freedom offered by independent publishing platforms like Substack, Patreon and Medium.

Oh, I doubt any group of independent journalists would seek to promulgate their own Non-Exclusive List of Competitors at Whom Thou Shalt Not Publish. But why should they? One’s ability to execute does not impair another’s completeness of vision, nor vice versa. According to Gartner, it takes all kinds, including visionaries, niche players, leaders and challengers.