Facebook, Instagram, TikTok, and Twitter this week all took steps to crack down on users involved in trafficking hijacked user accounts across their platforms. The coordinated action seized hundreds of accounts the companies say have played a major role in facilitating the trade and often lucrative resale of compromised, highly sought-after usernames. 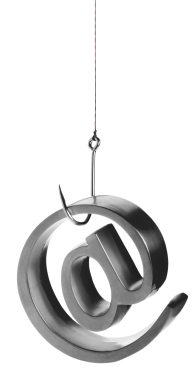 At the center of the account ban wave are some of the most active members of OGUsers, a forum that caters to thousands of people selling access to hijacked social media and other online accounts.

Particularly prized by this community are short usernames, which can often be resold for thousands of dollars to those looking to claim a choice vanity name.

Facebook told KrebsOnSecurity it seized hundreds of accounts — mainly on Instagram — that have been stolen from legitimate users through a variety of intimidation and harassment tactics, including hacking, coercion, extortion, sextortion, SIM swapping, and swatting.

Facebook said it targeted a number of accounts tied to key sellers on OGUsers, as well as those who advertise the ability to broker stolen account sales.

Like most cybercrime forums, OGUsers is overrun with shady characters who are there mainly to rip off other members. As a result, some of the most popular denizens of the community are those who’ve earned a reputation as trusted “middlemen.”

These core members offer escrow services that – in exchange for a cut of the total transaction cost (usually five percent) — will hold the buyer’s funds until he is satisfied that the seller has delivered the credentials and any email account access needed to control the hijacked social media account.

For example, one of the most active accounts targeted in this week’s social network crackdown is the Instagram profile “Trusted,” self-described as “top-tier professional middleman/escrow since 2014.”

Trusted’s profile included several screenshots of his OGUsers persona, “Beam,” who warns members about an uptick in the number of new OGUsers profiles impersonating him and other middlemen on the forum. Beam currently has more reputation points or “vouches” than almost anyone on the forum, save for perhaps the current and former site administrators. 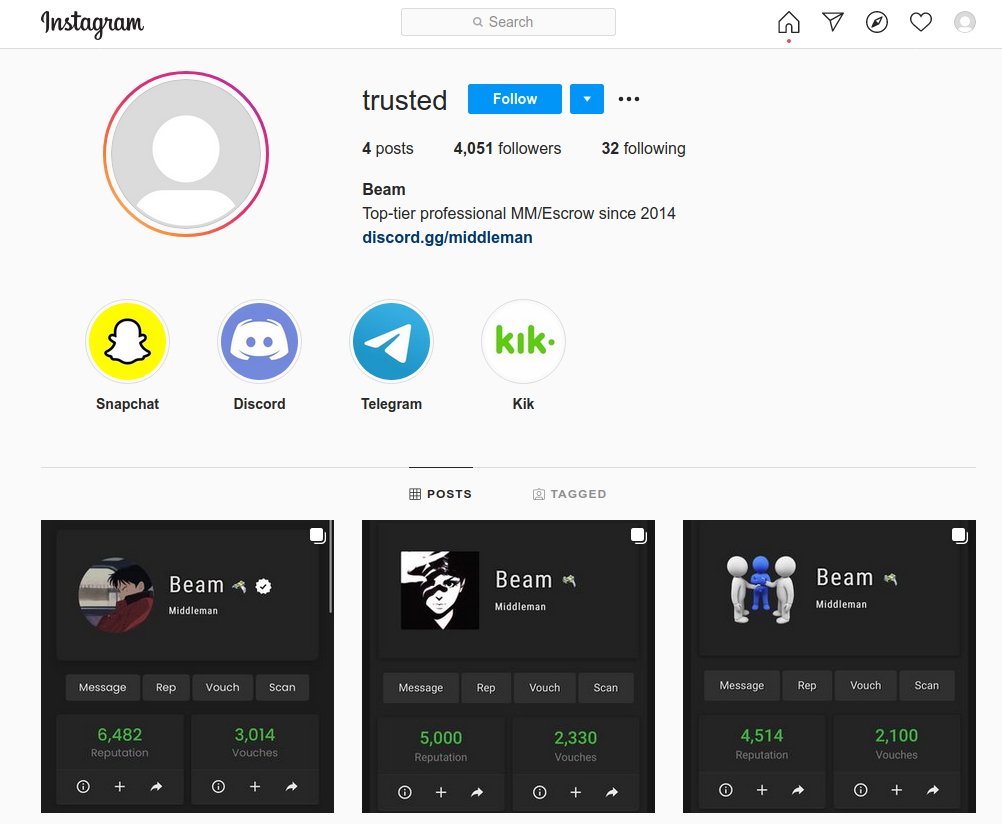 Helpfully, OGUsers has been hacked multiple times over the years, and its database of user details and private messages posted on competing crime forums. Those databases show Beam was just the 12th user account created on OGUsers back in 2014.

In his posts, Beam says he has brokered well north of 10,000 transactions. Indeed, the leaked OGUsers databases — which include private messages on the forum prior to June 2020 — offer a small window into the overall value of the hijacked social media account industry.

In each of Beam’s direct messages to other members who hired him as a middleman he would include the address of the bitcoin wallet to which the buyer was to send the funds. Just two of the bitcoin wallets Beam used for middlemanning over the past of couple of years recorded in excess of 6,700 transactions totaling more than 243 bitcoins — or roughly $8.5 million by today’s valuation (~$35,000 per coin). Beam would have earned roughly $425,000 in commissions on those sales.

TikTok confirmed it also took action to target accounts tied to top OGUusers members, although it declined to say how many accounts were reclaimed.

“As part of our ongoing work to find and stop inauthentic behavior, we recently reclaimed a number of TikTok usernames that were being used for account squatting,” TikTok said in a written statement. “We will continue to focus on staying ahead of the ever-evolving tactics of bad actors, including cooperating with third parties and others in the industry.”

Other key middlemen who’ve brokered thousands more social media account transactions via OGUsers that were part of this week’s ban wave included Farzad (OGUser #81), who used the Instagram accounts @middleman and @frzd; and @rl, a.k.a. “Amp,” a major middleman and account seller on OGUusers.

Naturally, the top middlemen in the OGUsers community get much of their business from sellers of compromised social media and online gaming accounts, and these two groups tend to cross-promote one another. Among the top seller accounts targeted in the ban wave was the Instagram account belonging to Ryan Zanelli (@zanelli), a 22-year-old self-described “social media marketing specialist” from Melbourne, Australia. 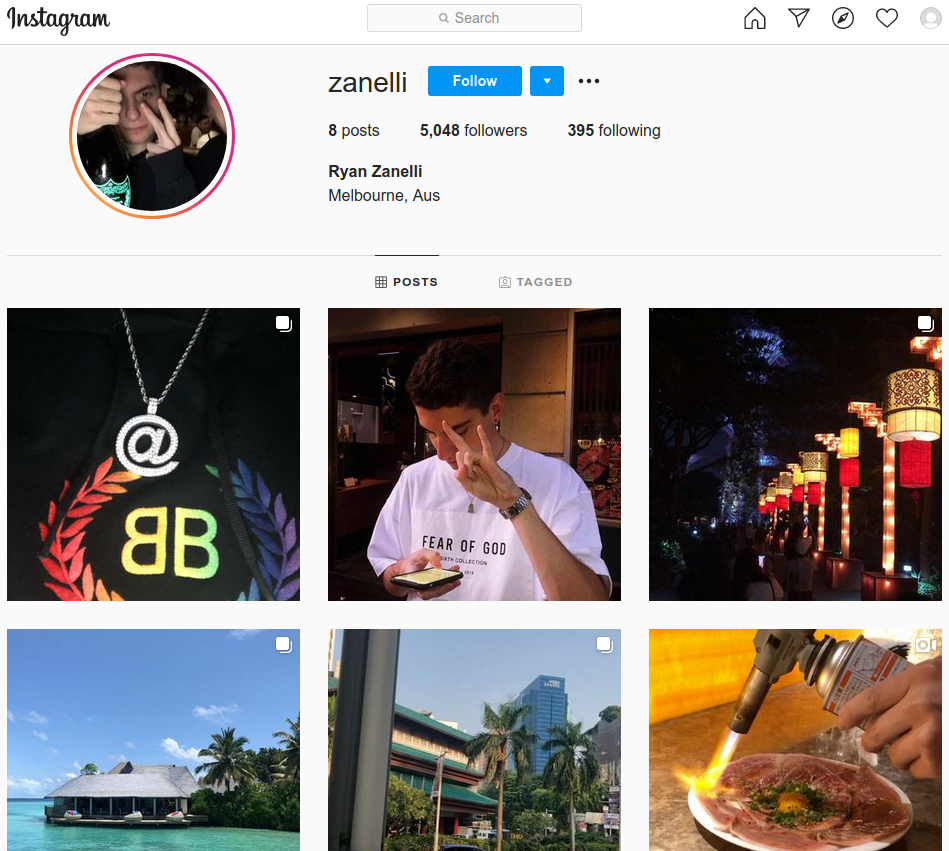 The leaked OGusers databases suggest Zanelli is better known to the OGusers community as “Verdict,” the fifth profile created on the forum and a longtime administrator of the site.

Reached via Telegram, Zanelli acknowledged he was an administrator of OGUsers, but denied being involved in anything illegal.

“I’m an early adaptor to the forum yes just like other countless members, and no social media property I sell is hacked or has been obtained through illegitimate means,” he said. “If you want the truth, I don’t even own any of the stock, I just resell off of people who do.”

This is not the first time Instagram has come for his accounts: As documented in this story in The Atlantic, some of his accounts totaling more than 1 million followers were axed in late 2018 when the platform took down 500 usernames that were stolen, resold, and used for posting memes.

“This is my full-time income, so it’s very detrimental to my livelihood,” Zanelli told The Atlantic, which identified him only by his first name. “I was trying to eat dinner and socialize with my family, but knowing behind the scenes everything I’ve built, my entire net worth, was just gone before my eyes.”

Another top seller account targeted in the ban wave was the Instagram account @h4ck, whose Telegram sales channel also advertises various services to get certain accounts banned and unbanned from differed platforms, including Snapchat and Instagram. 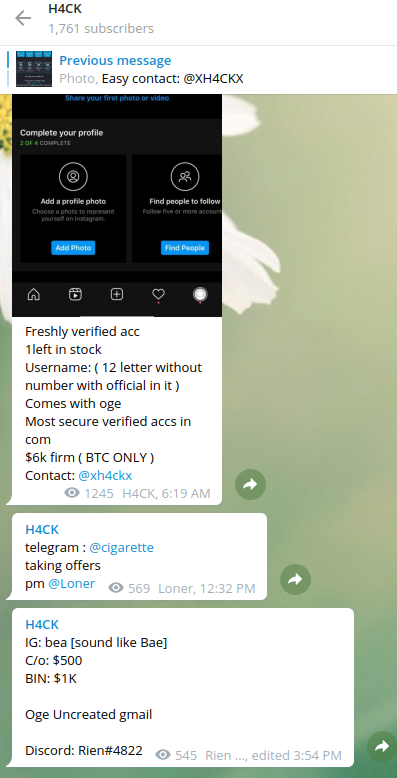 Snippets from the Telegram sales channel for @h4ck, one of the Instagram handles seized by Facebook today.

Facebook said while this is hardly the first time it has reclaimed accounts associated with hijackers, it is the first time it has done so publicly. The company says it has no illusions that this latest enforcement action is going to put a stop to the rampant problem of account hijacking for resale, but views the effort as part of an ongoing strategy to drive up costs for account traffickers, and to educate potential account buyers about the damage inflicted on people whose accounts are hijacked.

In recognition of the scale of the problem, Instagram today rolled out a new feature called “Recently Deleted,” which seeks to help victims undo the damage wrought by an account takeover.

“We know hackers sometimes delete content when they gain access to an account, and until now people had no way of easily getting their photos and videos back,” Instagram explained in a blog post. “Starting today, we will ask people to first verify that they are the rightful account holders when permanently deleting or restoring content from Recently Deleted.”

Facebook wasn’t exaggerating about the hijacking community’s use of extortion and other serious threats to gain control over highly prized usernames. I wish I could get back the many hours spent reading private messages from the OGUsers community, but it is certainly not uncommon for targets to be threatened with swatting attacks, or to have their deeply personal and/or financial information posted publicly online unless they relinquish control over a desired account.

WHAT YOU CAN DO

Any accounts that you value should be secured with a unique and strong password, as well the most robust form of multi-factor authentication available. Usually, this is a mobile app that generates a one-time code, but some sites like Twitter and Facebook now support even more robust options — such as physical security keys.

Whenever possible, avoid opting to receive the second factor via text message or automated phone calls, as these methods are prone to compromise via SIM swapping — a crime that is prevalent among people engaged in stealing social media accounts. SIM swapping involves convincing mobile phone company employees to transfer ownership of the target’s phone number to a device the attackers control.

These precautions are even more important for any email accounts you may have. Sign up with any service online, and it will almost certainly require you to supply an email address. In nearly all cases, the person who is in control of that address can reset the password of any associated services or accounts –merely by requesting a password reset email. Unfortunately, many email providers still let users reset their account passwords by having a link sent via text to the phone number on file for the account.

Most online services require users to supply a mobile phone number when setting up the account, but do not require the number to remain associated with the account after it is established. I advise readers to remove their phone numbers from accounts wherever possible, and to take advantage of a mobile app to generate any one-time codes for multifactor authentication.